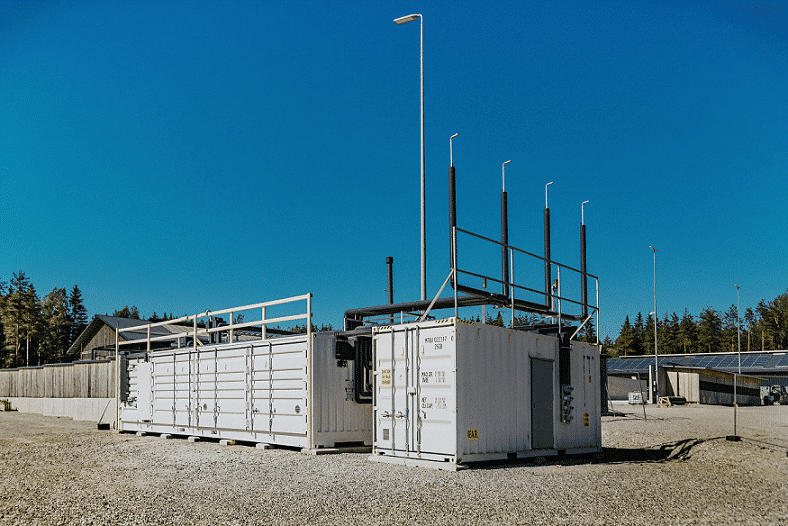 Keravan Energia Oy, a municipally-owned energy company in the Helsinki metropolitan area, and Q Power Oy, an energy technology company, have agreed on a strategic partnership to produce synthetic methane at the Kerava bioenergy plant. Synthetic methane is a carbon-neutral fuel which can be utilized in transport, industrial and energy applications. The fuel will be produced from carbon dioxide captured from the bioenergy plant smokestack, and clean hydrogen.

During Spring 2021, the partnering companies conducted a pre-feasibility study to determine the potential of the project. Based on the study, the companies have agreed to move towards a 4 – 10 MW installation. A 10 MW plant would reduce CO2 emissions by 16 500 tons per year, and the fuel produced would be sufficient for up to 250 heavy freight vehicles.

The production of synthetic methane will be commenced in September 2021 in a small-scale pilot, designed to validate the methanation process with the specific flue gas composition. In tandem with the pilot, a feasibility study will be started to elaborate the technical setup and economy of the plant as well as to compile materials to support a final investment decision. The goal is to start the commercial production of synthetic methane in 2024.

The produced synthetic methane will be utilized in traffic applications as well as in the Kerava gas grid. The heat energy produced will be fed into the local district heating network.

“Keravan Energia is committed to reducing emissions with concrete, determined actions. We see plenty of opportunities in synthetic methane: to decrease our own carbon footprint as well as to create new business in a changing market. The Q Power team is exceptionally competent in this field, and we are excited about the possibility to cooperate with them”, CEO of Keravan Energia Jussi Lehto comments on the project.

The project will deploy methanation technology developed by Q Power. The technology boasts an energy efficiency and maturity which leads the international field. The market for synthetic fuels is expected to grow rapidly in the upcoming years with ever-more stringent emissions reduction targets and a maturing regulatory environment. The Kerava project will open up numerous new business opportunities for Q Power and Keravan Energia.

Q Power CEO Eero Paunonen describes the potential of the sector: “Climate change mitigation required rapid emissions reductions in all sectors of the economy. Renewables-based synthetic methane will have a major role in several sectors in carrying our ambitious reductions. I am excited about the possibility to engage in cooperation with Keravan Energia, who have a proven track record of effective emissions reduction actions. We will move swiftly with our partner towards implementation in this project of internationally significant proportions.”

Keravan Energia is a modern utility with a history beginning in 1906. Keravan Energia is focused on producing renewable and low-carbon energy – production is primarily based on renewable domestic wood-based fuels. The company has reduced CO2 emissions by 88 percent since 2010. Coal use was terminated in 2001, and peat use in 2020. Keravan Energia operates a zero-carbon solar power plant and holds shares in several wind and nuclear power projects.

Q Power is an innovative energy technology startup, founded in 2019, specialized in synthetic fuel production solutions. Q Power has developed the most efficient technology on the market for synthetic methane production, and the company also has specialized competence in gasification technologies.